Sante-Winebar.co.uk
Home Features Selvapiana Is the Reason Why Chianti Rufina Should Not Be Overlooked

Whenever
one thinks of quality and Chianti the mind tends to take you to those
of Chianti Classico.   Within the Chianti DOCG there are sub-zones that
should not be overlooked and can compete with the best of them.  Fattoria Selvapiana is one of those wineries, long established within the Rufina sub-zone that we’re going to explore.

Fattoria Selvapiana has been within the Giuntini
family since 1827.  The property was initially used as a tower to
protect Florence from invasion.  Later it became a villa for noble
families and bishops.  Today the winery is operated by the 5th generation of the Giuntini family.  Interesting back story on the owner, Francesco Giuntini’s children who today are involved in operating the winery.  Francesco’s estate manager, Franco Masseti,
who worked with him for years passed away in the early 90’s. Franco’s
children grew up in that life and know the vineyards and the area well.
Francesco not having any children of his own to pass down the winery
too adoped Franco’s children.  The reputable enologist, Franco Bernabei, has been consulting for Selvapiana since 1978.

Selvapiana
occupies a large estate with over 500 acres with almost 150 dedicated
to vineyards.  The winery is also certified organic.  Francesco is said
to have been one of the first to produce riserva wines made out of purely sangiovese.

Although
the Rufina sub-zone is the smallest out of all the other sub-zones of
the Chianti DOCG producing about 4% of the overall production, it
produces some of the highest quality.  Sangiovese here is usually marked
with a bright acidity. The vineyards are some of the highest with a
cool climate due to its proximity to the Apennines with diurnal swings in temperature. 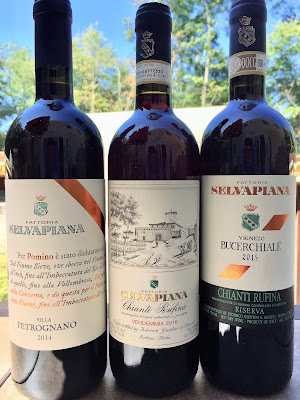 2016 Selvapiana Chianti Rufina DOCG – Made with 95% sangiovese with a small amount of canaiolo, colorino and malvasia nera
added. Aged 4 months in French oak casks.  A solid chianti selection.
Medium bodied with juicy cherries, bright acidity and a beautiful
elegance. A great price point to get a taste for the quality of Rufina.
SRP $19

2014 Selvapiana Pomino Rosso DOC Villa di Petrognano
– Quite a different wine compared to the others shared due to the blend
with 20% cabernet sauvignon and 20% merlot with the rest sangiovese.  Francesco has a close relationship with the owner of Villa Petrognano and sources his grapes from Cecilia Galeotti’s 13 acre estate.  The Pomino DOC is of the 4 delimited areas created to protect the appellation back in 1716  by Grand Duke Cosimo de’ Medici III.  The sangiovese
is aged in French oak casks for 29 months where the merlot and cabernet
spend time in French oak barriques.   A rather dry, complex wine with
many layers showing leather, dried berries backed with good acidity and
tannin.  SRP $21

2015 Selvapiana Vigneto Bucerchiale Chianti Rufina DOCG Riserva – This single vineyard, Bucerchiale,
wine has been produced since back in 1979 and is a classic example of
how Chianti Rufina shines and the quality coming out of this area.  It
is considered Selvapiana’s flagship wine and is only produced in the best vintages.  The wine is named after the farm, podere, during the mezzadria.  Aged 32 months in french
oak.  A structured wine showing firm tannin, good acidity combined with
an earthiness, hints of tobacco and cherry.  Nice finesse with a
lengthy finish.  I was overly pleased to enjoy this wine for my birthday
last October with a long simmered ragu.  Delizioso!  SRP $36 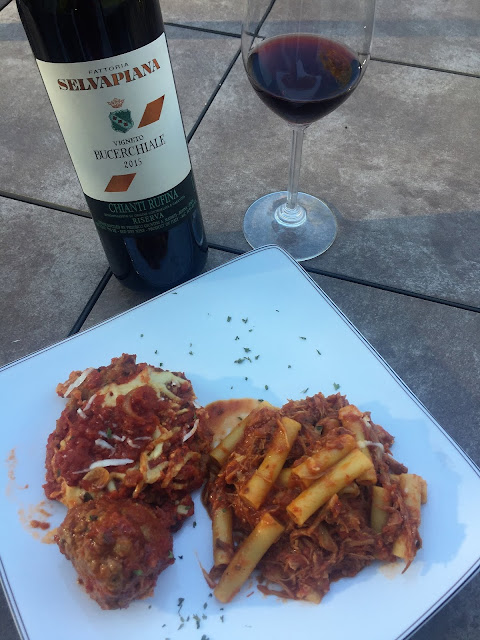 *These wines were provided as samples, but opinions are my own.

Sante Wine Bar promises to be a fair and objective portal, where readers can find the best information and recent news about wine.

Get The Best Home Mortgage Experience Possible When You Know